Photoacoustic imaging combines the advantages of acoustic and optical imaging. The latter gives the contrast and functional information whereas the acoustic part brings resolution and penetration depth. The optimization of optical illumination gives the possibility to image an extended region-of-interest at a few centimeters from the light source. The geometry which combines optical illumination and ultrasound   probe is then of major importance and greatly depends of the targeted medical application. The photoacoustic project of our team has been structured by 4 successive PhD theses contributing to the numerous challenges offered by this modality.

In collaboration with team # 5 (B. Montcel) Shengfu Li modelized the direct problem and proposed an approach to solve the inverse problem for reconstructing photoacoustic data [1] [Li-2014-Optics Express], [2][Li-2015-Biomedical optics express]. We focus on analytical models of optical fluence for multiple inhomogeneities embedded in an otherwise homogeneous turbid medium to analyze the factors that influence optical fluence distribution. Our model arises out of the solution of the diffusion equation [1]. Whenever possible, it can be used to quantitative photoacoustic tomography (QPAT) reconstruction.

The photoacoustic (PA) system developed in the lab consists in a Q-switched Nd:YAG laser delivering ns pulses at a repetition rate of 10 Hz. A tunable wavelength is obtained by adding an OPO (Optical Parametric Oscillator) system. PA signals are recorded using an ultrasound (US) probe coupled with a clinical US scanner and an acquisition module. Both PA and US images can be recorded using this setup.

PA and US acquisitions were made on homemade bimodal phantoms whose acoustic and optical properties are well-known.

Design of an optoacoustic-US handheld probe for 3D imaging

Within the frame of a European project (ITN Marie Curie FP7, project OILTEBIA) granted and conducted with 13 international partners, Mohammad Azizian designed a bimodal hand-held probe to acquire in 3D both US and Photoacoustic images. He proposed an original annular array probe including light illumination within the center. 3 successive publications have provided the opportunity to model the optimal geometry, to propose an adapted reconstruction and finally to carry out an experimental validation  [4] [Azizian-2018-Journal of Biomedical Optics], [5] [Azizian-2019-Biomedical Optics Express], [6] [Azizian-2020-Optics Letters]. As part of the ITN EU project, and with the support of Labex CeLya, a summer school was organized in Lyon with more than 70 international participants (http://opus2016lyon.sciencesconf.org). 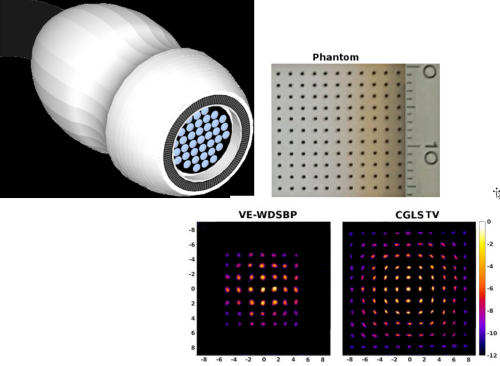 The PhD of Aneline Dolet addressed the difficult problem of 3D oxygenation quantification with a multispectral approach. Through collaborations with University of Florence, Italy (P. Tortoli), Macao University (Z. Yuan) and Université de Nice (C. Richard and R. Ammanoui), we proposed an original classification method based on a spatial-spectral approach, which has been validated on phantoms and animal models [7] [Dolet-2018-EURASIP Journal on Advances in Signal Processing], [8][Dolet-2017-IRBM]. 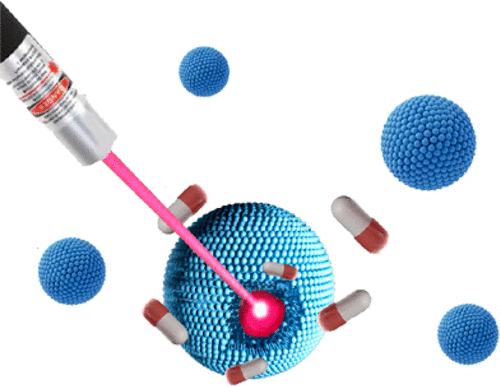